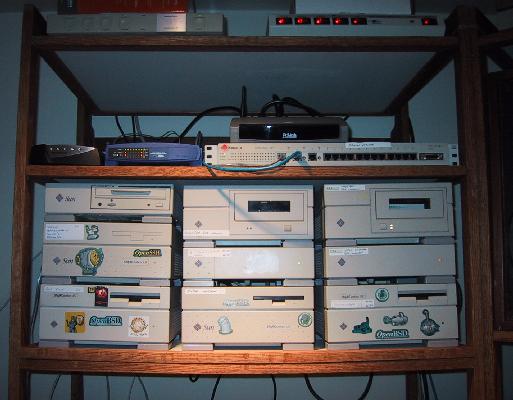 These boxes are (pause for a moment of silence) retired as of 7/2/02. Proximate reason was a drive failure in the mailserver; replacing them with a single PC reduced component counts enormously and sped everything up.

From 2010 or so, I have fanless Intel NUC boxes in industrial chasses from Logic Supply. More expensive, but bulletproof, silent and low power. Recommended.

From 2006 to about 2010, hardware is an Athlon 64, 1GB of memory in an Antec Sonata II case. Hardware SATA RAID5, DSL, firewall, the usual trimmings. Debian-based Linux OS.

I couldn't get the onboard RealTek 8100 ethernet working (It's incompatible with both of the kernel 8139 drivers), so networking is my trusty DEC Tulip 21140. Paired 80G IDE drives in RAID0 for the file server, and a 30G for the system disk.

Interestingly, all of these were on filtered power, via a large Topaz ferroresonant transformer. So I don't think it was power. I'm pretty annoyed with the Soyo; it was a premium board when I bought it in 98. Onboard SCSI and so forth. Maybe the CPU replacement killed it. Wouldn't that be ironic, eh?

We have Time Warner Cable, at the 50/5 megabit tier. I've been very happy with the service, reliable and fast. Note that I bought my own SB6141 cable modem rather than rent a lesser unit from TWC, and plan to upgrade to the 6191 soon.

I use and recommend the $80 Edge Router Lite (3 port). Three gigabit ports, fanless, with hardware accelerated networking that can handle a million packets per second. This is the only router I've found to date that can handle 100+ simultaneous TCP connections for things like Debian ISO torrents. The Vyatta software is powerful and flexible, and I'm using their transparent SOCKS proxy to block ad domains at the firewall.

I used to use a Sun box running OpenBSD and pf; that's now off to live with a friend in Illinois. I'll run OpenBSD again once I can find a cheap machine that doesn't make noise.

Old setup:
I like defense in depth. There's an IP-less filtering bridge on the front end, backed by a port-forwarding NAT box. Seems to be a decent combo, and I'm just now learning what you can do with the bridge rules.